Unabashed RANT: The Concrete Continues to Creep Up the Street... 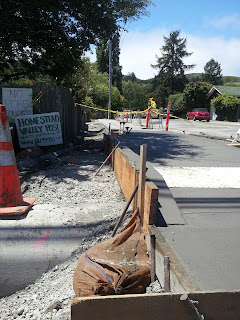 Soon, what used to be a "complete street" with a perfect safety record will be narrowed, pedestrians will be separated by a tripping hazard and blocked from view by parked cars.
Since we were never given a full mock up, we don't know exactly HOW the North side will be affected  - YET.
When will they HEAR US and LISTEN?
When someone's kid on a bike gets hurt??
Some more "what ifs and "if onlys" :
What if the associate engineers, Anthony Lum and Scott Schneider, had more freedom to make design decisions?

-- or what if they had the benefit of input of the collective creative consciousness of this community BEFORE design?
But they didn't have that opportunity and neither did we.

WHY? The process. Or, actually - the lack of fair process. The lack of effective process.
WHY?? TUNNEL VISION? Too many regulations? Experience of "pushback" that caused the DPW to purposely avoid community input? ?

Someone sent me this email the other day "There are no honest judges in Marin."
County Counsel told the Judge that the project was approved in 2010!
The Board of Supervisors voted to accept the grant in 2010!
I've been told by several lawyers and members of the DPW staff that the process was approved on April 3, 2012.
How can a judge make a correct decision, when he is misinformed by the the County Counsel?
What is the truth? Can't we trust our public servants  - to tell the TRUTH?

(Warning: below is a very long, unabashed RANT. Within the rant is the TRUTH. )

WHAT THE HECK is going on around here?

We bought property on a street that had no sidewalks - so did a lot of other people in Homestead. Despite our own feelings that no change was needed, we initiated new concepts for community engagement - and quite a few members of this community joined in a conversation that should have happened BEFORE the grant was written!
Those of us who didn't want ANY sidewalk at all were and still are willing to negotiate a path - we were willing BUILD one ourselves.

BTW - I heard couple of real estate agents talking about the sidewalk a few weeks ago - they were lamenting the loss of the "character" of the neighborhood.
So, how is that SLAB going to increase our property values?

All this turmoil - for a SAFER ROUTE?? Our street CURRENTLY has a 100% safety record.

There is a MOUNTAIN of correspondence - documented over the past two years, many, many alternative, low impact solutions - offered by the people who LIVE HERE AND HAVE THE MOST VALUABLE INPUT TO OFFER.
These solutions address the few safety concerns of people who use Evergreen. NONE of those safety concerns warrant the imposition of this million dollar slab the entire length of the street.
WHY force an impervious concrete slab when a PATH will do ?
Not "Because that is the way the grant was written."
Either "Because the FUNDING and politics are driving this project" or some guy at County doesn't want to admit that what USUALLY works for them is NOT working for this community?

First, they told us - it is this or nothing. So a lot of us said, "No thanks!"  That wasn't good enough. We pointed out the inaccurate and misleading information in  the application, but the job moved forward. That is what we get for using an ethical argument when people care more about money than ethics.
County asked for a year extension - WHY? To actually take our suggestions, give the IMPRESSION of PUBLIC INPUT, or gather information about the people who live on the street so they can bargain with them and sell that sidewalk?
After the dog and pony show at the Mill Valley Community Center - Kinsey, MHS and Safe Routes had convinced the DPW to move forward - as if there was any doubt they would?
Yes, there are some people in Homestead who have had safety concerns and supported the "idea" of a sidewalk, but NOTHING to warrant THIS slab.
It's a bad idea, it will add polluted water to a blue line creek and yes - it is UGLY!

I can understand the argument that "safety" is more important than aesthetics, but this is ridiculous.

DPW told us they would go to each property owner - WHY DID the DPW stop at 78% - of their "informal survey" of south side homeowners? Because they read on our blog that the TRUE majority of Evergreen and Homestead did not want it?

In my heart I want to believe that the DPW cares about this community and really thinks the sidewalk is an improvement. I used to think I was a good judge of character - now I'm not so sure.

Frankly, I don't know who was giving Scott and Anthony their orders, (Klock?) but I'm glad I don't have to work for someone who doesn't respect me when I'm telling them what the feedback is from the community. And I can understand and forgive one emotional outburst from Mr. Klock - but not two - this person is a public servant - doesn't that mean they work for us? .
It was bad enough when he blew up at me in the office after I was INVITED to come view the file - to see who wanted a sidewalk and who didn't - but the residents of this commuinty do not appreciate people being lied to - and we don't appreciate County employees intentionally stalling the access of public information from citizens who are trying to protect their environment and stand up for our civil rights to a fair and democratic process.

And speaking of emotional outbursts - might as well let it fly - I don't care how "inappropriate" it was for the wife of a County employee to be at the pre-construction meeting.
She's was there to support her husband,  - so maybe her husband is a bit embarrassed  - big DEAL!
Do you think my husband hasn't been embarrassed by something I have said or done ? Do you think he ever wanted us to be at the center of this ridiculous sidewalk fiasco?
Do you think I don't feel embarrassed that I am reduced to name calling because of the stress caused by this INTRUSION?
When people feel BETRAYED - or see someone they care about being treated unfairly - and they CARE - they speak up. At least they do when they have courage.
Can anyone please tell me what IS appropriate about this TRAVESTY being inflicted upon Evergreen Avenue?

WE DIDN'T ASK FOR THIS!  We have every right to be angry. So do my neighbors.
For that matter - so do the DPW staff ! How can they serve this community when their hands are tied? Or when they are being instructed NOT to reply to emails or questions?
I admit, that - to someone just entering this mess - some of us must seem like crazy, angry people, but those people do not know the whole story.
Remember - that first meeting at Marin Horizon School - when we had the first opportunity to find out about the sidewalk - though it had been in development for several years without our knowledge?
I thought Frank Lurz was an angry, loudmouth jerk - but in these past two years, I have found him to be a very intelligent, creative and chivalrous man.
In truth, he knew what was up - the rest of us were too naive!

Well, you just wait until people find out what is REALLY happening down here in Homestead!

County told us if we didn't want a sidewalk, we wouldn't get a sidewalk!

As the concrete creeps up the street - who REALLY benefits, besides the Marin County budget?
Do you think the school is going to benefit? They would have received benefit from a path.

Because of the flaw in the process, and the deliberate action to keep Evergreen residents OUT of the LOOP - DPW was led to believe that the community wanted this sidewalk and now, look at what is happening aour beautiful neighborhood!
I don't care who said they supported the "idea" of a sidewalk - or wanted a "safer route" in the beginning - how do you feel about it now? Are you happy with what you are doing to this community?

The Ghilotti Construction crew is awesome - and they are just doing their job. They don't care what they build - or take apart - either way, they get a paycheck!
Why not just pay them to take it up and create a path like there was before? We have it outlined in the neighborhood recommendations.

Why spend $1.2 million dollars on a project that will increase the total of polluted runoff from Evergreen to 1.2 million gallons of UNFILTERED, polluted STORM WATER PER YEAR?
Plus - where are the HYDROLOGY reports?
If there are no hydrology reports - how do you KNOW this won't affect the flood plain?
How can you just count the additional impervious surface - when you are REGRADING the entire STREET???

WE ARE PAYING A TAX DOLLAR per  GALLON to POLLUTE a BLUE LINE CREEK that contains FEDERALLY PROTECTED STEEL HEAD TROUT - and to SCREW UP what USED to be a COMPLETE street with a 100% safety record - so a FEW WELL connected people in MILL VALLEY can have a "more convenient walk to the yogurt store...????!!!

All because Marin County  - that has a budget surplus  - is TOO CHEAP to give the DPW FUNDING or because some engineers at the County can't admit they might NOT know more than we do? To save FACE?? Are you f**in kidding me?

If only the POWERS THAT BE at the County felt the same way, we would ALL be better off.

After all, Mr. Kinsey told me in March that lawsuits were "Cost of doing business in the County."


Sorry - THAT is not acceptable and NEITHER IS THE SLAB.

You mean to tell me that our BOARD OF SUPERVISORS would rather spend taxpayer money suing its citizens  - who are trying to preserve the physical integrity of a 100% safe street and the health of our creek -  than give the DPW whatever funding they need to STOP POURING CONCRETE all over our street  - and do what is RIGHT by this community?

WHY are citizens forced to SUE the government they already pay TAXES to PROTECT THEM?? WHO PROTECTS US from our government?
We have only stated time and time again, that a lawsuit was the last resort!
So, for spending all this time and effort in a sincere effort to work WITH the County and MHS - to bring this community together - we are getting screwed OVER by the County - who keeps continuing to POLISH THIS CONCRETE TURD -  that is being paid for by a $900,000 grant  - which was awarded ON FALSE PRETENSES??

All children are our children - and they DESERVE SAFE GREEN STREETS, not more CONCRETE!

- Mari (thank God I am not a Politician) Mack Tamburo

Posted by Homestead Volunteers at 11:32 AM