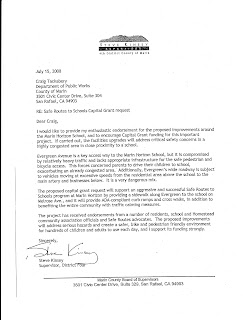 Well, it was interesting.
I heard many concerns from Evergreen residents and others; valid concerns about the endangered Steel head, environment, safety, drainage and potential flooding issues. These questions are still left unanswered, but construction is still scheduled to start on June 11th.
Steve Kinsey, when going over the history of the admittedly FLAWED process, mentioned that other people (HVCA) wrote letters of support for the project in the SR2S grant application, but failed to mention his own letter of support for the project.
What was really mind boggling was that Kinsey admitted they screwed up by not getting more community input before creating the design, but they'll "be sure to do better next time."
Oh, and they are sure to be advocating for more permeable paths on future projects.

Scott Schneider fielded construction questions and comments from folks who don't want this sidewalk. (The wife of one of the DPW staff) didn't appreciate the way I verbalized my displeasure, or what she called "nasty" letters to the DPW and she sure let me know about it.
Never mind the fact that I've defended the DPW - We even had to take it outside for a bit, which felt pretty weird, but hey, I've been taking a lot of heat from a very vocal minority who actually do support the project ever since I had the nerve to speak up against this environmentally irresponsible, complete WASTE of Safe Routes funding.
I have to say, I appreciate her passion and respect her right to express herself, but I really don't understand how someone can be so concerned about whether or not a comment might "make one of the DPW staff cry..." but not be concerned about how changing the physical characteristics of a street with a perfect safety record might cause someone harm...??
I'm giving her the benefit of the doubt and guessing she just didn't know that much about the history of the project.
Why aren't more people concerned  that a quite a few property owners - who never asked for a concrete sidewalk and has asked that one NOT be built - are getting stuck with dealing with construction for two months and then the after effects of a concrete slab for eternity?
Never mind my neighbors' tears? They don't count?
Anyway, there sure are a lot of people who don't live on Evergreen or in Homestead that want to force this sidewalk onto other people - DESPITE the fact that they/we DO NOT want it.

There is still no evidence that supports the need for this project to go forward - other than, as Mr, Kinsey put it - "so the county can be reimbursed for money already spent."
Oh yes, and so the County won't have to pay out of pocket for road maintenance.
You see, seems Kinsey WON'T give the DPW funding to just fix our street and/or lower the speed limit, because he needs money to keep County Counsel ready to fend off concerned citizens.
In our March meeting, when I mentioned that some people are considering suing to stop the project, he was sure to tell me to "Cost of doing business in the County. We have lawyers on retainer."

That's what we get when we have "abysmal" voter turnout:
Abysmal government representation.
Posted by M Tamburo (A Vehicle for Change) at 11:41 PM